When Return To Oz was released on June 21, 1985, audiences expected another whimsical journey back to the land which both adults and children held dear. However, this Disney family film was not quite as delightful as the previous journey to Oz. Gone were the bright color palettes, adorable sidekicks and musical numbers. Instead, they were introduced to the vindictive Princess Mombi, the evil Nome King, and a creepy supporting cast with shocking (literally) sequences that terrified children of the 80s.

The highly anticipated film flopped at the box office. Canadian reviewer Jay Scott said “Dorothy’s friends are as weird as her enemies, which is faithful to the original Oz books but turns out not to be a virtue on film, where the eerie has a tendency to remain eerie no matter how often we’re told it’s not.”

According to Hitflix, the production was saddled with mounting tensions between the studios and director Walter Murch. Leadership changes within the studios resulted in the firing of Murch for his bleak vision, even though it did hew closer to L. Frank Baum’s books than the original movie. It took help from colleague George Lucas for Disney to allow the production to continue with Murch at the helm, but this time with no support from Disney. In addition, Murch said “it was a difficult film to distribute, as we found out, given the zeitgeist of the mid-’80s. Maybe any zeitgeist.” 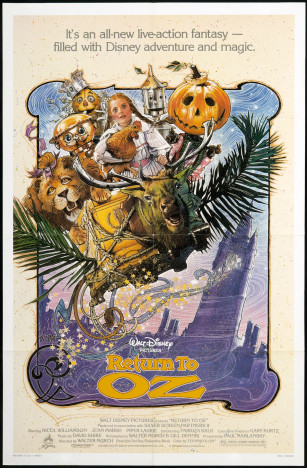 Hitflix takes a look back at the movie upon its 30-year anniversary and reveals its most nightmare-inducing moments. Although the $28 million production struggled at the box office, earning a paltry $11 million, the article mentions that “Return to Oz remains one of the most unheralded near-classics of ‘family’ cinema, a beautifully shot, magnificently scored film that has what so many movies aimed at children lack: a real sense of wonder and imagination. And of course it doesn’t shy away from darkness, a quality that makes it unsuitable for very young children but which also gives it a sense of real depth and real stakes.”

Let’s take a look back at some of the most terrifying scenes and characters, which are nothing short of brilliant by today’s standards, from Return to Oz.

1. Our young heroine doesn’t square off with evil-doers just yet. Until then, she is forced to endure some electroshock therapy because she is considered a nutcase.