Every night we get to listen to Bill O’Reilly give his opinions on the problems that entire minority groups purportedly pose to the nation. But it looks as though now Bill-O has his own big family problems to face. 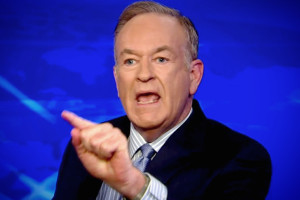 According to an article from Gawker, Bill O’Reilly is losing custody of his two children due to a domestic violence dispute with his ex-wife Maureen McPhilmy. According to one source close to the case, a forensic examiner testified at the closed court hearing that one of Mr. O’Reilly’s daughters claimed that she witnessed her father dragging McPhilmy down a staircase by her neck.

An article posted by Dylan Byers from Politico reports that Bill O’Reilly says the allegations towards him are “100% FALSE.” O’Reilly continues, “I am going to respect the court-mandated confidentiality put in place to protect my children and will not comment any further.”

From our own experiences as viewers of the O’Reilly Factor, we may have to side with the court on this one. I mean, let’s not forget about the infamous Inside Edition meltdown (Warning: Video NSFW).

To read more details of the custody battle, check out the full Gawker article here.

If you think — as many people do — that Bill O’Reilly is crazy, then you should check out this article here, TV Host: Lacking Scientific Proof, “I don’t believe in gay people, I don’t believe there is such a thing.”